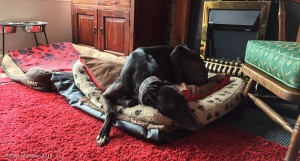 Being the very important Greyhounds that we are, today me and Sox was invited into Gills house to spend the day.

I suspect it was because Ireland was playing today in the rugby six nations competition, and as I am Irish myself, I like to give them my support.

Then we had two surprise visitors.  First this very noisy strange two wheeled thing turned up.  I later found out it was a BMW GS motorcycle, and Gill suggested that if it had a side car, I could get a leather jacket and goggles and go for a ride.  Not sure if I fancy that, I much prefer a nice warm car or even better the Lincolnshire Greyhound Trust Van.  Anyway back to the story; from off this rather strange two wheeled thing, two strange creatures got off.

From the smell I suspected it was Richard and Caroline who visited us a couple of weeks ago and gave us lots of nice ear rubs, but these figures looked nothing like them.

Well imagine my surprise when they seemed to pull their heads off, and yes my rather long and very brilliant nose had not let me down; it was Richard and Caroline.  It turned out they were wearing things called ‘crash helmets’.  Now I have no idea why you would want to wear these things and then go out crashing; personally I prefer crashing out on my bed in front of a nice warm fire.  Still humans are strange.

They stayed for tea, coffee and ear rubs before once again pulling on those strange additional heads and jumping on that motorcycle and riding off.

I was a little sad to see them go as I am getting them well trained now in ear rubs but it was time for tea and rugby.

To top off a rather fun day Ireland won.  The rugby team is not quite as successful as I was in my racing career but it was good to see them win.